How will Tory moderates join with Labour moderates? When?

In July there was talk of disaffected moderates in the Labour party teaming up with counterparts in  the Tories.  The article on the right was published in the Observer

In September, the Labour conference showed how deep the divisions have become in the party after the re-election of Jeremy Corbyn.  Moderate Labour MPs are concerned the party will never return to power in Westminster. On a personal level, many fear they will be de-selected. The pressure for the party to split is immense.  How can this pressure be released?

Pressures in the Tories are somewhat different, but there is a distinct gulf between moderates and the right. Theresa May is pandering more to the right than David Cameron on topics such as grammar schools. And of course Brexit. Many Tory MPs disagree.  Will we see pressure to split in the forthcoming Tory conference?

The key issue is that few MPs would be prepared to move to a new moderate party unless it was electable. That requires size. That would require the sort of re-alignment where the moderates on the left join with the moderates on the right, under the common banner of wishing to stay in the EU: 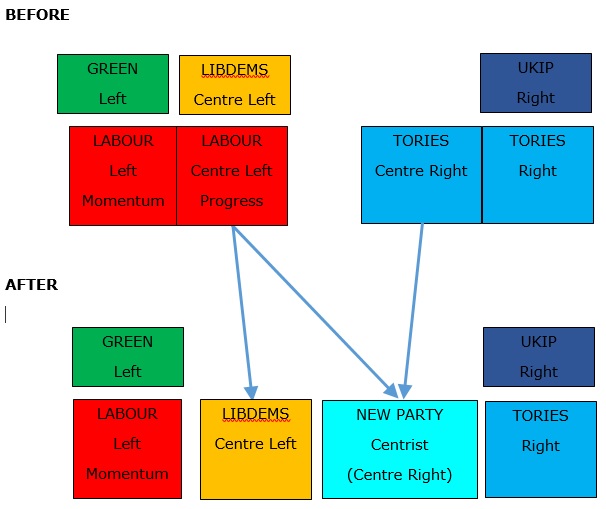 WHEN WILL THIS HAPPEN?

Maybe steps are already being taken. But a political party takes some weeks to register. The Just Political Party is already registered as a centrist / centre-right party and ready to go. So the moderates can join together anytime. Now?
Posted by Just Charley at 16:07