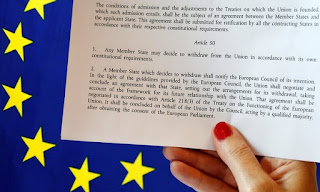 Article 50 of the Lisbon Treaty has become infamous.  Making a formal "notification" under the terms of this article is how the UK will trigger leaving the EU.  But much of the media are suggesting that the UK will have a new 'deal' with the EU within 2 years.  This isn't quite right.  It's only half the story.

The negotiations that follow triggering Article 50 are only to reach an exit deal. A 'divorce' deal, if you like.  To quote, it is only necessary to take "account of the framework for its future relationship with the Union" in respect of the UK.

It doesn't necessarily mean there will be a new trade deal in place within those 2 years.  Indeed such is the complexity of a new trade deal, this timescale is extremely unlikely.  At best there will be some sort of interim arrangement, which the EU has hinted they have in mind.  That's for their protection to continue selling to the UK as much as anything.

As an analogy, let's imagine a professional partnership trading as Eustace Utton. 28 solicitors, accountants or window cleaners.  The trade doesn't matter.  One of the older partners, Uberto King, decides to leave.  He doesn't want the rights and obligations of the partnership.  But he is not retiring, and there may well be ways that he will do business with the partnership in future.

Uberto has rights to a share of the assets and liabilities of Eustace Utton.  There's an office, paintings on the walls, IT equipment. But there's also obligations to pay staff, associates and to fund the pension scheme. How much Uberto is paid when he leaves, or how much he needs to pay in, has to be determined on the date he leaves.  That needs to be negotiated.

Firstly the remaining 27 partners need to decide how to approach the negotiations.  As part of the negotiations they need to take into account the future relationship.  Will Uberto become an associate, when his skills are needed?  What about if he introduces work to the firm?  The exit negotiations don't need details to be finalised. Just the "framework".

So what is Uberto's share?  As one of the first 5 partners in the firm, he still is entitled to 10% of the profits each year.  But he had to put in 20% of the deposit on the office, so is he entitled to 20% of the current value of the office?  That's all up for negotiation.

APPLYING THIS ANALOGY TO ARTICLE 50

This analogy is simplistic, and the specifics for the UK/EU exit negotiations will be somewhat different.  But similar principles apply.

For example, the EU does own offices and other assets.  There is also a pension liability that has accumulated during the UK's membership. And the current budget round, to which the UK has subscribed, does not end until 2020.  The net payment needs to be negotiated, and when it would be paid.  Indications are that the UK will have to pay money in, and do so for some time to come.

The aim is to get this exit negotiation agreed in principle within around 18 months.  That provides a few months to gain ratification within the EU and the UK, and make any necessary changes to the exit deal before the 2 years expires.

Full negotiations on a trade deal may not start until after that process is concluded. One reason being in case the UK actually remains.  Certainly the EU has indicated that detailed negotiations won't start until then, and could take several years.

So no.  It is extremely unlikely that a full new trade deal will be achieved within 2 years.  Only the 'divorce' exit deal and probably some sort of interim trading arrangement.
Posted by Just Charley at 08:16 No comments: