Brexit - What Economic Return on the Investment?

So now we have it.  The OBR's independent forecast for the UK economy for the next 5 years has been published.  So is Brexit good or bad for the economy?  What's the economic return for any short-term investment?

The OBR (Office of Budget Responsibility), which is independent of the Government but has access to ministers and other civil servants, has concluded: 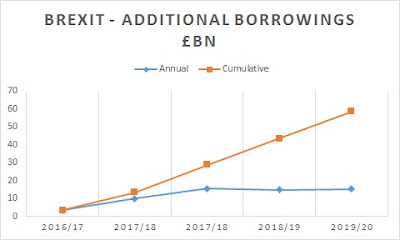 To put that in context:
So in the next 5 years the OBR is saying that Brexit will be bad for the economy, when borrowings are in any case rising too fast.

SURELY THE OBR IS WRONG?

The OBR acknowledges that the uncertainty in forecasts is greater than normal.  The adverse amounts could be lower or indeed higher.

It would appear that the OBR has had little more information from the Government than the general public.  "Brexit means Brexit", with of course little knowledge of what the EU will agree for its future relationship with the UK, other than what has been stated publicly.

The OBR has effectively had to pull figures out the hat.  But what they are saying is that the figures they had to choose from reflect that:
This is entirely consistent with other forecasters, and reflects:
We also have to recognise that their forecast may be optimistic, and the actual outcome could be far worse.


SO WHAT WILL WE GET FROM THIS INVESTMENT?

The Leave campaign boils down to three potential advantages of leaving the EU:
As noted above, the problem is that trade deals take many years to negotiate.  In the case of a replacement deal with the EU:
Immigration pros and cons is too big a subject to cover here. But the OBR specifically expects lower immigration and a significant economic hit as a result - some £6 billion in the fifth year:

HOW ABOUT AN ECONOMIC RETURN ON THAT INVESTMENT?

In economic terms, within five years there is no return on the investment. The jury's out as to:
One has to wonder whether the cost of Brexit could ever be worth the investment.


SO IS BREXIT GOOD OR BAD FOR THE ECONOMY?

The OBR, supported by other forecasters, suggests that negative factors resulting from Brexit will significantly outweigh positive factors for at least 5 years, perhaps much longer.

The best estimate, which could be lower or higher, is:

That means:
So Brexit is clearly bad for the economy.  Whether it is also bad for the UK's "National Interest" is a matter for debate.  But for many people personally affected by lost income or poorer services, that is what matters.

Arguably the economic impact should be put above any other factors put forward in favour of Brexit.  In that respect, the debate goes on.