Any Credible Alternatives to the UK's Nuclear Deterrent? 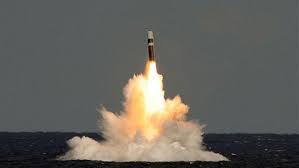 Today the Commons is debating one of the most important topics other than Brexit - officially "Motion relating to the UK's nuclear deterrent" about renewal of the Trident submarines.

Yet there is one aspect which I rarely hear mentioned, if ever.  Let's imagine a world without nuclear weapons.

But first I should say I'm not a great fan of nuclear weapons. Their use, especially by mistake or by getting into the wrong hands, would be cataclysmic.

Secondly we also have to consider the security risks to the UK in 2016 and beyond, which are different from when Trident was furst commissioned. To what extent are nuclear weapons the answer? They are certainly not the whole answer, but there are still risks where they are very relevant.

So what would the UK's ultimate deterrent be without nuclear wepaons? Where they would be of value?  What would make any despot intent on taking over the UK stop in their tracks?  Would it be chemical? Biological? It would probably have to be something aimed at the despot's homeland. Something very serious indeed!

No doubt the replacement deterrent would carry risks, maybe as high as nuclear weapons if not higher.  The cost may be even higher to develop and deploy safely when not in use. I haven't seen figures.

So I would ask MPs thinking of voting against the motion to have identified at least one clear alternative effective non-nuclear deterrent, and to have considered the risks and cost to be lower. Only then vote against the motion this evening.  Otherwise abstain if you cannot support the motion.
Posted by Just Charley at 15:28