Post-#EUref - What If There Were To Be A New Centrist Party For Remainers?

On Sunday morning, readers of the Observer saw the headline across pages 12 and 13 saying “Pro-EU Labour and Tory MPS look at chances of forming a new centrist party”. 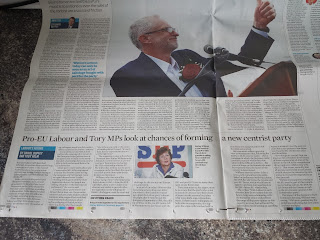 This idea would be to re-shape British politics.  This was picked up at the end of the Sunday Politics show on BBC, and then in an online posting by Asa Bennett for the Telegraph

The Observer article by Daniel Boffey and Toby Helm says that a cabinet minister has disclosed that there have been informal discussions between Tory and Labour MPs about forming a new centrist party.  After all, the British public regard themselves as centrist, and it is well known that in a General Election the party that wins the centre wins the election.

Here’s my analysis of data collected by ComRes in late 2014, showing where people think they fit on the left-right spectrum. 0 is far left, 5 centre and 10 far right.  This is clearly centric, with the right shoulder slightly bigger than the left:

The talks are at an early stage, although I hear there may be an announcement later this week.

The talks involve MPs from both Conservative and Labour parties. This is at the highest level, including Cabinet Ministers and their shadows. The Observer’s source says “talks should be taken seriously”.

Who precisely is still a mystery, but my mission to discover, given what they could gain from a conversation with me.

Discussions are said to taking place in the infamous Parliament tea rooms, which sadly are ordinarily off-limits to the general public.

Nonetheless it is possible to meet MPs as they pass through public areas.

On the Labour side, it’s primarily MPs wanting a chance of being elected to Government at the next General Election.  This is given that Jeremy Corbyn does not see that as a priority, and many believe it will not happen if he is still leader at that time. There is a good chance that he will then still be leader, given that he is refusing to resign, and the Labour membership may well elect him again – provided he is actually allowed to stand, over which there are legal arguments.

On the Conservative side, on Sunday there was a fear that the party would find itself in a similar position to Labour, with membership generally supporting Andrea Leadsom but some 20 MPs reported as threatening to resign if she became leader. Andrea has now stepped down, and to that extent that problem has disappeared.  As a former constituent, I’m sure Theresa May will make a very good PM.

But a fundamental problem remains. Theresa May confirmed yesterday, Monday, that “Brexit means Brexit”.  Substantially more Conservative MPs backed Remain than Leave. So what are the Remainers to do? 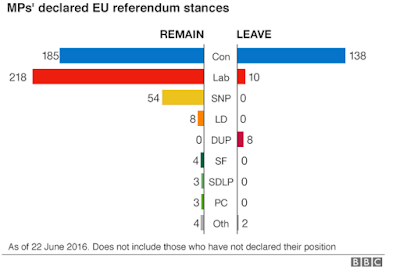 What the EU referendum did was bring together MPs around a common belief in remaining in the EU. The majority were MPs from the Labour and  Conservatives parties.  What they found was that “there is an opportunity to build on the newly founded relationships between centrist MPs in both parties” with a common wish to remain in  the EU.

It should be recognised that any major party is a coalition of different views, across a spectrum for each issue. However the two main parties can be simplified to each having two major factions:
There has been talk of both parties splitting on these lines. The question is to do what?  How could the Centrist Remainers get re-elected?

This is how the main parties could split and re-form.  Other parties have been excluded for simplicity, but UKIP in particular should not be forgotten given they are still scoring around 15% share of support currently in polls.

The result is that the public would have a choice of two centric parties, the LibDems and the New Party, as well as the leftish rump of Labour and rightish rump of Conservatives who would keep their party and branding.

The question first is “If”.  I asked Michael Howard yesterday, and his view was that it wouldn’t happen. But I’m not so sure.  There are strong pressures for it to happen:

So when? A week is a long time in politics, and hey what two long weeks we have just had!

A key issue is that it typically takes around 6 weeks to register a new party with the Electoral Commission.  What if there is a party recently registered that has centrist objectives and constitution, believing in:

Could enough MPs choose to join that new party to be a credible force in Parliament? Even form a Government at some stage?

Who would lead it?  There are plenty of good strong candidates on both the Conservative and Labour sides who might see themselves as Prime Minister if they can muster sufficient support.


I ask "What if?". And then offer this suggestion for a new party