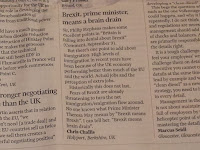 As published in the Financial Times 13 September 2016:

Philip Stephens makes some excellent points in "Britain is falling into denial about Brexit" (9 September).

But there's one more point to add about immigration. High levels of immigration in recent years have been because of the UK economy performing better than much of the EU and the world. Actual jobs and the perception of extra jobs.

Historically this doesn't last. Fears of Brexit are already threatening to turn the net immigration/emigration flow around.


Since writing this letter, I have been talking further to the young folk working in hotels and coffee bars. The vast majority are European. One in particular came over for her gap halfyear, before the Brexit vote.  She's due to go back shortly. But if she was planning to come over now, she would go elsewhere in the EU. So I suspect would the next person who mght have replaced her.

So when I say Brain Drain, I don't just mean professional medics. I mean people in all walks of life. The hospitatiliy industry in particular looks like it could shortly really struggle to staff its premises and events.

For those who voted for Brexit to fix an immigration problem, my concern is that it is a long-term solution to a short-term problem. It is therefore the wrong solution.

As for those people wanting to restore democratic control to the UK legislature, it beggars beleief that future Brexit steps should not be subject to parliamentary approval. This is especially as the Referendum question did not specify the form of exit..