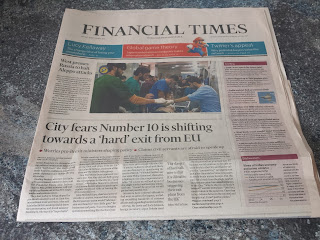 As written to the Financial Times today in response to their headline article:

Your lead article "City fears Number 10 is shifting towards a hard exit from EU" (26
September) concludes with "There has to be a balance between the rational and the
political. It can't just be politics".

Indeed. There seems to be very little in terms of realism and pragmatism.

After all the British public were sold a Cake Brexit - having your cake and eating it -
and voted accordingly. But a Cake Brexit is clearly not on the cards. Only a Hard or
Soft Brexit is being discussed, with many saying a Soft Brexit is not feasible. Hence
your headline.

The Labour party have decided not to debate Brexit at their party conference.
It seems Theresa May is also doing all she can to suppress public debate.

If we're not careful we'll drift into a Hard Brexit for which the public didn't actually
vote.  What will happen when the public cottons on? Brexit riots? Maybe not, but
the government will lose support if they are not open and honest about what Brexit
will mean.

If it does make sense, we can go ahead with enthusiasm. But if the
proposed form of Brexit doesn't make sense, people need a final chance to stop it
before the Article 50 button is pressed.
Posted by Just Charley at 15:59