#EUref - Interaction between the EU, the EEA, the Euro and other Institutions 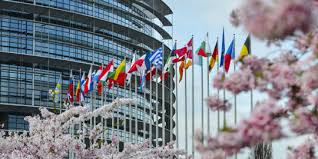 To understand the Brexit debate, it is worth understanding the structure of the European Union (EU) and the terminology in common usage. I've kept this to just the key aspects relevant to the debate, as further details can be easily found elsewhere such as here.

The Genesis of the EU

The EU grew out of earlier steps to bring the countries of Europe closer together economically after the Second World War, initially between Germany and France in respect of coal and steel.

A key early step was what was known in the UK as "The Common Market" which was clearly aimed at trade and was not particularly political.  The UK's last European referendum was on whether to become a member, for which there was strong support. There remains virtually universal approval in the UK for this sort of economic collaboration.  The Leave camp is:
The EU Today

However further treaties between the original and additional countries created a far more political set-up now called the EU. This consists principally of:
The "European Economic Area"

There is also the "European Economic Area" (EEA) which includes all EU countries plus Norway, Icelandand and Leichtenstein.  This arrangement avoids the application of duties and tariffs on products and/or services traded between the EEA countries

A key condition of being a member of the EEA is the acceptance of the "Free Movement of People" (FMOP). Just like people from say Newcastle are free to live and work in the South East (and vice versa), people should be free to move as they wish around the EEA. FMOP is a fundamental principle accompanying free trade in the EEA, as it allows workers to follow and fuel economic activity wherever it develops:
Leaving the EU may or may not involve the UK joining the EEA as a non-EU member.  In this respect various factions of the Leave campaign cannot agree the strategy, objectives and approach to the EEA  This is fundamental to our trading relationship with the EU after Brexit, and the lack of clarity is a major weakness of the Leave argument.

Political Integration and the Euro

This by necessity would require the creation of a single currency . The Euro launched in 1999, after a 3-year lock-in of exchange rates of the currencies of participating countries.

The "EuroZone" represents the countries using the Euro.  However three EU countries in 1999 did not join the Euro in 1999 (plus Norway, Iceland, Leichtenstein and Switzerland which were not eligible):
Any countries subsequently joining the EU must adopt the Euro in due course, though several have not yet done so.

Going back to the early 90s, I thought it would be a mistake for the UK to join the Euro currency. There was a fudge on admission criteria of countries such as Greece which looked like the Euro was an accident waiting to happen. And so it has proved for Greece, with several other countries also struggling to adhere to their financial conditions of Euro membership.  The organisations behind the Euro, notably the Euroepan Central Bank (ECB) didn’t look up to the job. So it has proved.

Furthermore, the economies of Eurozone countries using the Euro have generally not flourished as much as the UK since the Euro came into existence, and arguably theEuro has hampered their economic development. The UK has been better out of it.

Indeed in recent years the Euro continually teeters on the brink of collapse, which would likely result in reversion to national currencies. Not a happy prospect for those countries. The turmoil of transition would certainly not be good news for the UK economy, with EU export markets expected to shrink as a result of that turmoil.  Business investment is likely to be cut back in those countries, with a consequent slowing of those economies.

The Schengen Agreement and Free Movement of People

The countries of continental Europe made a pragmatic decision in the "Schengen Agreement".  Alongside the Free Movement of People, they didn't want the bother of running and policing borders.  Border posts on the continent are now deserted.  Any person getting into one part of the Schengen Area can easily move around the whole area if they wish.

However the UK and Eire (and Cyprus) have the natural barrier of the sea. So they did not join the Schengen Area. Passports are still checkable at ports such as Dover and airports such as Heathrow. This allows non-EU nationals to be stopped, and provides a check on EU nationals in a way not available on the continent.  In that respect the UK already has greater control over its borders than countries in the Schengen Area. But the UK needs to allow EU nationals free movement into and out of the UK (to match the free movement of UK nationals around the EU).

Here is a necessarily complex but nonetheless useful picture of the countries in each of the areas described above: 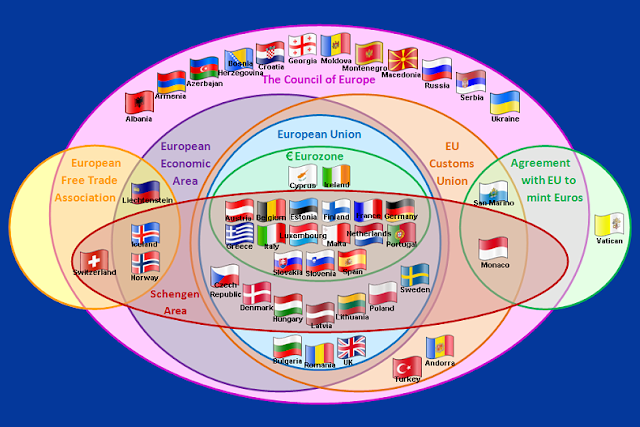 The summary above is the  background to the blog post "The EU Referendum - The Key Factors in Your Voting Decision.