#EUref - The International View of Brexit

In early June I started my posts on the EU from a position of euroscepticism, but sitting on the fence until I had assessed the situation properly. Part of this is what people abroad think of the idea of Brexit - the UK leaving the EU.

So taking a completely impartial view, here goes. What do people abroad think?

A quick search uncovered this article "Brexit's International Observers: The Good, the Bad and the Ugly" from April.  Here are some key extracts:

"It is striking to British voters that President Obama, a man who is famously reluctant to travel, feels so strongly about the vote that he is travelling to Britain to warn America’s closest ally not to consign itself to the fringes. The Commonwealth is lining up behind the same message: India’s Prime Minister Narendra Modi, the Canadian primier Justin Trudeau, and Australian Prime Minister Tony Abbott have all spoke out against a Brexit. New Zealand’s Prime minister even argues that if Europe was its doorstep, New Zealand “would be looking to join, we certainly wouldn’t be looking to leave it.“.  Meanwhile, the Commonwealth’s Ronald Sanders argues that “Increased trade with Commonwealth countries is perfectly possible for Britain. It does not have to shed itself of Europe for that to happen”.

"What of the emerging powers that the ‘Vote Leave’ camp want to strike up trading deals with?  Britain’s favoured future trading partner China seems as interested as the US and Commonwealth on keeping Britain inside the EU. The Chinese President Xi Jinping was pretty explicit on his state visit to London and the Chinese billionaire Wang Jianlin who has invested extensively in British businesses has equally expressed the opinion that Brexit “would not be a smart choice” for the UK, as separation “would create more obstacles” for investors."

Conversely there is support for Brexit from some sources. But only becasue it would suit therir own domestic purposes:

"So which foreign leaders do want Britain to leave?

The former Belgian Prime Minister, Guy Verhoftstadt, has argued that Vladimir Putin is “rubbing his hands at the prospect of Brexit”. Putin has not spoken out himself but the Russian media is replete with comparisons between the break-up of the Soviet Union and that of the EU, and many hope that EU-Russia sanctions are more likely to be dropped if Britain left.

The most vocal advocates are far-right parties in other EU capitals. “Brexit would be marvellous”, Marine Le Pen enthuses, “it will be the beginning of the end of the European Union.”

Aroud the same time the BBC reported that the International Monetary Fund (IMF) had warned that the UK's exit from the EU could cause severe damage.  Whilst the IMF's analysis was disputed by the Vote Leave camp, the IMF was one of several major organisations giving such warning.

So in April it was clear that the important people globally were against Brexit. Has anything changed since?  Anyone worth listening to come out in support of Brexit?

After warnings in the last couple of days of a £30 billion black hole in the UK's finances, I saw this extract this morning from the Washington Post 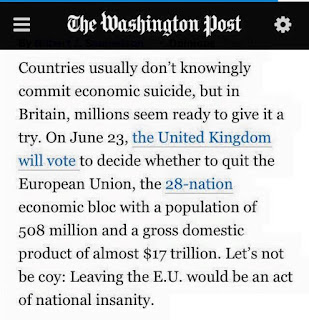 "Unilever CEO Paul Polman has written to 100,000 current and former staff in UK urging a Remain vote. Letter co-signed by his 3 predecessors." The letter says: 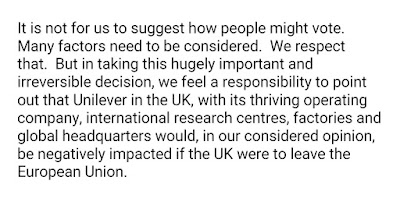 To provide some balance, leading British businessmen such as the heads of JCB and Dyson are backing Brexit. They are both major exporters, but it's the truly international voice I'm interested in here.

For purposes of balance, I was hoping to find some level of credible international support for Brexit. But alas nothing so far. If you know of any, feel free to share it as a comment.