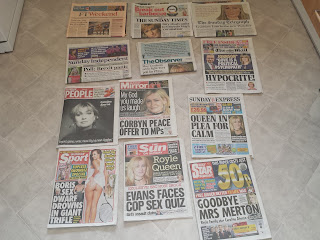 On Sunday I bought all the papers. It’s now Wednesday, The Chilcot report is about to be presented. But where are we on the EU Referendum and its fall-out?

It’s still worth a quick look at the Sundays.

The Sunday Sport had the right idea.  Virtually ignore the referendum and concentrate on what it knows best – boobs.

The other Sundays stuck to bollocks, as that is the only word for what is happening in UK politics and the economy at the moment. (Though a different word will be required for prime time TV!). Specifically:

The Sunday Express headline was “QUEEN IN PLEA FOR CALM”.  Absolutely. It’s time to think.

The Sunday Mirror ran an article written by Jeremy Corbyn, leader of the Labour Party titled “I’ll reach out to those MPs who oppose me” in which he says:
It was clear then as it still is now, that Jeremy intends to cling on.  Meetings with MPs and unions have not changed that yet.

The Labour party is about to split. There are even artlces online about how the assets would be split. Who owns the Labour name? The HQ lease? Split imminen!.

On Sunday there were 5 leadership candidates for the leadership fo the Conservative party. We’re now down to 3:
So what about all those Tory MPs who campaigned for Bremain? Significantly more in number than campaigned for Brexit.  Finding themsleves in a party led by a Brexiteer and a party membership strongly of that ilk too.

What will the Bremain MPs do?  It looks like the Tory party will finally split over Europe.

Watch this space!
Posted by Just Charley at 09:38