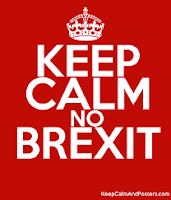 On Wednesday, the new leader of the Conservative Party, Theresa May, became Prime Minister.  Leading a “Brexit is Brexit” government with Brexiteers appointed to the most senior positions facing out to Europe and the world.

“Bremainers” within the Parliamentary Labour Party are in a very awkward position:
Yet consider this.  Theresa May can only continue to govern if she holds a majority in the Commons. It would only take around 10 Conservative MPs to switch to another party for her to lose her majority and, in the absence of any effective coalition, force a General Election.

We already have uncertainty, so this wouldn't make much difference. But after the result it would potentially put a halt to the time and effort being wasted on Brexit, which is only sending the UK backwards:
A few investment losses like this might be an acceptable sacrifice if Brexit was expected to produce a substantial improvement in economic activity in the short or long term. But I was in the Foreign Affairs Committee meeting last Thursday when Philip Hammond, the then Foreign Secretary now Chancellor, said that he expected to have to choose the least damaging Brexit option when the current assessment is complete. I nearly fell off my chair.

His precise words were "...the mandate to Government was to do that [leave the EU] in a way that minimises the damage to the economy and our prospects for the future." in answer to Q40. "Minimise the damage"?  What sort of government would agree to that?

So a stop to this Brexit nonsense should be sooner rather than later.  Indeed a matter of urgency.  It will be some weeks or months before the assessment of Brexit options is complete, although this is expected to confirm the assessment before the Referendum that all Brexit options are worse than staying in the EU. That delay and uncertainty is too long.

WHAT ABOUT A NEW CENTRIST PARTY FOR BREMAINERS?

As was reported on Sunday, there is talk at ministerial level of forming a centrist pro-EU party from like-minded MPs from both the Labour  and Conservative parties. As it takes some weeks for a party to be registered with the Electoral Commission, interested MPs thought they would have to wait.

But I asked on Tuesday “What If” a party was already registered with the appropriate centrist and pro-EU objectives and constitution?  A core of MPs could make the move now.

Well such a party does exist. Registered as PP2520, “The Just Political Party” is exactly that.  "Just" as in Social Justice and with the registered description "Great Aspirations. Great Britain".  The main hashtag is #JustThinking.  The Just Political Party was registered in 2014 and has not been used to field a candidate, or indeed incur any expenditure other than registration fees.  It is just like a newly registered party, up and ready to go.

The Just Political Party is granting memberships from MPs from any party who can demonstrate their centrist and pro-EU credentials. Conservatives due to the situation above, and from Labour due to their leadership hiatus. The membership fee is nominal.

For MPs, at a personal level, The Just Political Party may well provide better opportunities for their career. This is especially for founder members joining now, including Labour MPs who are unlikely to get into government in 2020 or any earlier General Election. Founder members can also set The Just Political Party's agenda and specific policies from a clean sheet.

If founder members bring along Bremainer colleagues from any party to The Just Political Party, the new Bremainder centrist party could command a substantial presence in the House of Commons, and undoubtedly a substantial public following.

As mentioned above, this would likely prompt a General Election. Many people in the country feel this is only right and proper after a change of Prime Minister mid-term.  In that event The Just Political Party could even form the next Government. That would certainly be the objective.  Stranger things have happened!

There will be a lot of work to do to set up the full party machine at a national and local level. And that will need to be funded.  But plans have already been documented to do so, prepared by a Chartered Accountant.

I am the catalyst and enabler, but it is down to centrist Bremainer MPs to act.

As a Labour MP:
Please get in touch via Twitter @just4charley or link to me via Linkedin http://bit.ly/29DJ8tT as a matter of urgency.  We can meet in Westminster.  Now is the hour.
Posted by Just Charley at 10:48