Is the EU Referendum result 'safe' or 'unsafe'?

Leaving the European Union is a major step for the United Kingdom.  We should only do that if we are certain there is public support for such a move. If we are, then it is "safe" to leave the EU.  If not, then we should remain in the EU.

The question is, did the Referendum in June 2016 provide the answer?  Was the result "safe"?  Or was it "unsafe"? 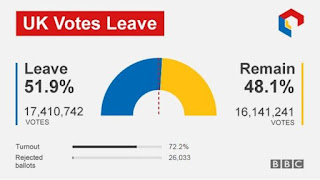 The Government are using words about the result like "clear", "emphatic", "overwhelming" and "unarguable".

But it wasn't clear: 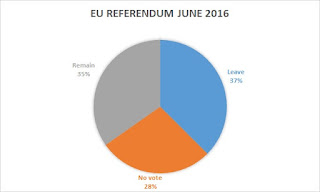 One would hope that a move to leave the EU would therefore be done with some caution, not the gung-ho approach currently being taken.


HOW CLEAR WERE THE ARGUMENTS?

It would be far easier to accept the June result if the referendum campaigns had been clear and honest, so people could have made a well-informed decision. Sadly there were deficiencies on both sides, but the Leave campaign had more clearly lied and deceived voters.  As mentioned above, a switch of only 650,000 would have resulted in a Remain win.  Quite likely given what is discussed below:

The £350million extra that could be spent on the NHS

One of the most prominent messages approaching referendum day was this on the side of a bus: 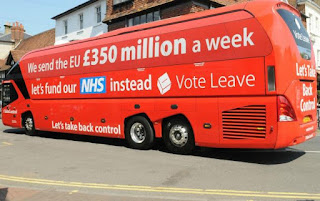 But this was utterly misleading:

The £350m claim should have been withdrawn. It wasn't. Instead it became more prominent.

Before the referendum, various people warned that there was the risk that various economic damage would be caused by leaving the EU.  These could result in:

The Leave campaign said such claims were rubbish.

Whilst a recession has so far been avoided, the risks remain.  A number of things have happened since the referendum to highlight tbose risks as real:

Confusion between the EU and the Single Market

To some people in the Leave camp, leaving the EU also meant leaving the Single Market.  A new free trade deal would need to be negotiated with the EU, but would be expected on more favourable terms than currently.

But other Leavers were saying, or at least implying, that a free trade deal could be provided similar to Iceland, which is members of the Single Market without being a member of the EU.

The public were undoubtedly confused.  The referendum question itself only mentioned the EU.  It would be "unsafe" to assume that meant leaving the Single Market as well.

Indeed the latest poll mid October suggests voters want to stay in the Single Market by 59% to 41% to leave.  That is well in excess of the margin of votes to leave the EU.  Again that may be because the similarities and differences between the Single Market and the EU are still not well understood.  It is only one poll, but suggests a potential shift away from support for Brexit

Yet Donald Tusk, the President of the European Council, has recently echoed many other EU politicians in saying "It's a hard Brexit or no Brexit".

It is not "safe" to interpret the vote to leave the EU as a vote for a hard Brexit.


WHAT ELSE HAS CHANGED SINCE THE REFERENDUM?

The sharp drop in the value of the pound is making imports far more expensive.  Consumers are beginning to see price rises on supermarket shelves, clothes, foreign cars, white goods and many other imported products.

The key indicator of inflation is also expected to increase.

For the Government, there will be increased pressure on costs:
Whether the pound's devaluation was caused by the Brexit vote or not, most people will believe that it was.  The correlation is too stark.

Like everything else above, increased costs will tend to make people change their minds from Leave to Remain.


WHAT ABOUT ECONOMIC FORECASTS?

The forecasts before the Referendum suggests the risk of a major slowdown in the British economy.

Forecasts for the Autumn Statement at the end of November have not yet been published.  But we now know the drop in sterling value, the consequent icncrease in some Government costs, and an increase in borrowing costs. The chances are still very high new forecasts will show a slowdown compared to remaining in the EU.

How will the public react?  Likely more against Brexit than in support.


SO HOW SAFE WAS THE REFERENDUM RESULT?

If leaving the EU is a good idea, then public support for Brexit would increase.  But all the issues above will tend to produce a shift towards Remain.  Certainly there is no clear support for a Hard Brexit, where the UK also leaves the Single Market.

So was the referendum result to leave the EU "safe"?   No.  In itself it is not clear.

Indeed it is "unsafe", as public opinion is likely to shift away from Brexit in the months before the Article 50 Leave button is pressed.

What should the Government do?  Proceed with great caution, and be prepared to cancel Brexit unless it can more clearly show a "safe" desire to leave the EU.

If this means a second referendum, then maybe that's what we need.  But it's quite likely that cancellation of Brexit will becone blatantly obvious.  We'll see.