4 days after the EU referendum result and I am reminded that a week is a long time in politics.  And we've only had half of one!!  I have said very little since Friday, but there are four key points I would like to make together now, as they inter-relate:


(1) Should the UK actually leave the EU?

There is no doubt that if #VoteLeave had won the referendum with a clearer majority, say over 55:45, then the UK Government should be getting straight on with pressing the Leave button permitted under Article 50. At least if #VoteLeave had run a clean campaign that could not be heavily criticised as misleading the public.

But that is not the case. The result is a marginal 52:48, and the Leave campaign was a pack of lies, as assessed in point 3 below.

We need to remember the referendum is only advisory on the government. They are not bound by it. The Government could argue that, given the economic woes that are already playing out, it is simply not in the best interests of the UK to leave the EU.  I'm sure the public would understand, including the vast majority of people who voted Leave. Many are already expressing their regrets in public of voting Leave, notably Kelvin Mackenzie who wrote the article behind The Sun recommending their readers to vote Leave.

So I am deeply disappointed that the Prime Minister and his Cabinet have decided to press on with Brexit, rather than to say they will be reviewing the vote and what it really meant.  Though the Cabinet has in fact left it to the next PM and his/her team to make the decision whether to ignore the Referendum result, or possibly re-run it.

My disappointment is that now the markets are officially expecting Brexit, when it is unlikely as described below. Do the traders know this? I suspect they do, but are playing the market for profit at our expense..

Here is an excellent article by Jolyon Maugham QC about what would need to happen before the "Big Green Button" is pressed to invoke Article 50 to leave the EU .

Oddly it is not clear what would have to happen.  But it looks like a "Big Green Button Leave Bill" may have to be put before Parliament, and be passed by the Commons and Lords in the same way as any other legislation. If so there is plenty of chance the Bill would be rejected, with sound reasons that can be explained to the public.  After all, doing nothing keeps the UK in the EU.

Personally I think there ought to be a "Big Green Button Leave Bill" if it is constitutionally possible, even if not strictly necessary.   Certainty is needed.

The debate before 23rd June was a phoney debate.  Now we need the proper debate.  In Parliament and in public.

It is clear to many people that #VoteLeave won because enough of the public believed their claims despite the key claims being proved lies. Because there was nothing to stop the claims being continued.

Here is the claims webpage from the official VoteLeave website which was in two sections, two printed pages each.  On the left is "If we were to leave the EU" juxtaposed against "If we vote to stay in the EU" on the right. In each case the claim headline is below the relevant photo: 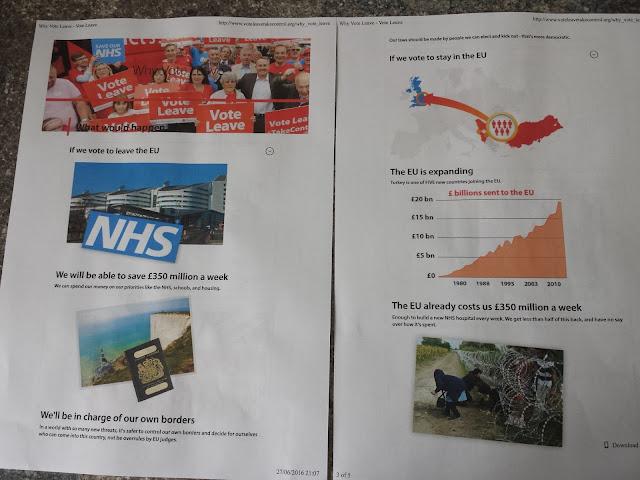 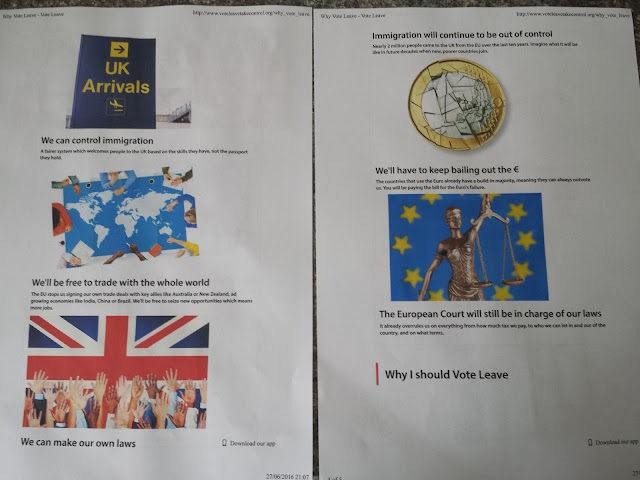 Claim number 1 is "We will be able to save £350m a week" repeated as claim 3 of the "stay in" set. In each case the emphasis was that the money can be spent on the people's favourite, the NHS. There are several issues with this claim:
Claim number 2 and 3 " We will be in charge of our own borders" and "We can control immigration". There is already control over non-EU nationals, but this would be extended to EU nationals only if any new free trade deal with the EU/EEA avoids Free Movement of People. This has never happened before for a European country. Norway is the case in point, accepting full FMOP for their access to the Single Market.

It is a disgrace that the media did not adequately challenge or debate this point. Upwards of 33% of Leave voters did so principally over immigration, a Red Herring I alerted to the media on 6 June.  In those two weeks so much could have been done to challenge the claim, and set the balance of possibilities!

Claim 4 "We'll be free to trade with the whole world". At last some truth, but only half truth. America has already said we would have to queue behind the arrangement already being made with the EU.  Any other trade deals would take years.

Claim 5 "We can make our own laws " is true. But again only half true:
The other claims are less prominent. Those above were enough to mislead enough voters into voting Leave to let Leave win..

Here is a fascinating BBC update on what VoteLeave are now saying, They are pulling back to a position nearer the truth. Too late?


(4) A Role for the Advertising Standards Authority?

If the VoteLeave website had been advertising a commercial product or service, any member of the public would have had the right to complain to the Advertising Standards Authority as to whether the claims were:
As the ASA explains here,  the main political parties could not agree the rules to apply to political advertisements (incluidng leaflets, billboards etc). So all political adverts were exempted from the ASA's considertion.

To be fair, this was a partly a practical matter.  ASA rulings are usually given in tmescales too long for the short election campaign, unless:
The cost of replacing incorrect publicity, and the negative PR that would generate, would soon apply the pressure needed to stop politicians making an untruthful claim.

So what can be done? This is a complex subject in terms of practicalities. But one I believe needs urgent attention if democracy is to survive. Elections can never be allowed to be based on a pack of lies again!